The acoustic transmitter is the easiest to explain. These ‘pingers’ (made by Vemco/Innovasea) periodically emit coded ultrasonic ‘chirps’ or ‘pings’. The chirps travel through the water which is a fairly good conductor of sound (much better than air) until they may be picked up by a nearby receiving system. In some regions, large arrays of receiving stations are deployed and periodically serviced by research organizations, such as the Prince William Sound Science Center. When a coded ping is ‘heard’ by such a receiver, the code is stored in memory with a time and date stamp. When the memory is downloaded during an annual service visit, this will tell researchers that a specific pinger was within approximately a 1km radius of the receiver at a specific date and time. These pingers may last for many years, and some of the sharks we tagged in Resurrection Bay in previous years have been ‘heard’ in Prince William Sound. One nice aspect of these pingers is that we do not have to recover the tag to obtain these occasional, opportunistic location data on specific sharks.

The larger mini-PATs on the other hand initially only record data from built-in sensors such as pressure (depth) and temperature to their own memory. Then, at a pre-programmed time, they detach from the host, float to the surface of the ocean and uplink a summary of previously recorded data. However, the amount of data they can transmit is limited. If we are lucky and actually find and recover the tag, we can download a much more detailed and comprehensive data set than we receive via satellite transmissions. That is why we offer a reward for the return of these tags. If you find such a tag (or other types of tags we use, such as Life History Transmitters or LHX tags) – call in your find, and you may be eligible for a reward!

Mini-PATs (made by Wildlife Computers) transmit data through the Argos system, using receivers aboard polar-orbiting satellites. We will provide some additional details on how this system works in future blog entries. In addition to allowing for data uplinks, the Argos system can provide information on the location of a transmitter, while it is transmitting. This will give us a single location for a shark at the time the mini-PAT detached itself from the shark and floated to the surface to transmit. Of course, we also know where we caught, tagged, and released the shark – so we know the start and end-points of a shark’s movement over the course of one year – if that’s when we program the mini-PAT to detach. We don’t necessarily know however where the shark may have been in the meantime.

Mini-PATs also incorporates a light sensor, and under certain conditions, the tag can actually very coarsely estimate its location by measuring day-length – which varies with latitude, and the time offset of local noon (when it is brightest) to UTC – which varies with longitude. However, on sleeper sharks that tend to stay in colder, deeper waters often well below the photic zone, this approach, also called geolocation-by-light, rarely yields good location estimates. How we deal with these tracking challenges will become a bit clearer in the next section – Spatial Analysis.

And finally, we also use much simpler, smaller, and cheaper versions of the mini-PAT called Mark-Report PATs or simply mrPATs. Mark-Report PATs (made by Wildlife Computers) are also programmed to detach at a specific time, float to the surface and report via the Argos system, but they don’t transmit hardly any data. Instead, they just give us a single location for the shark at the time of detachment. The two mr-PATs we plan on deploying will be programmed to detach after 4 and 8 months, respectively, and the mini-PAT will detach and report at 12 months.

We are using up to four tags on each shark, as long as the shark is big enough, like the one shown in this picture.

If the sharks are too small to carry four tags, we may drop the mrPATs, the pinger, or even the mini-PAT. In this case, we would still use one of the spaghetti tags to positively identify the animal as having been caught and sampled. In the next section on Spatial Analysis, you can read about what we want to do with all this tag data.

We are using up to four tags on each shark, as long as the shark is big enough, like the one shown in this picture. 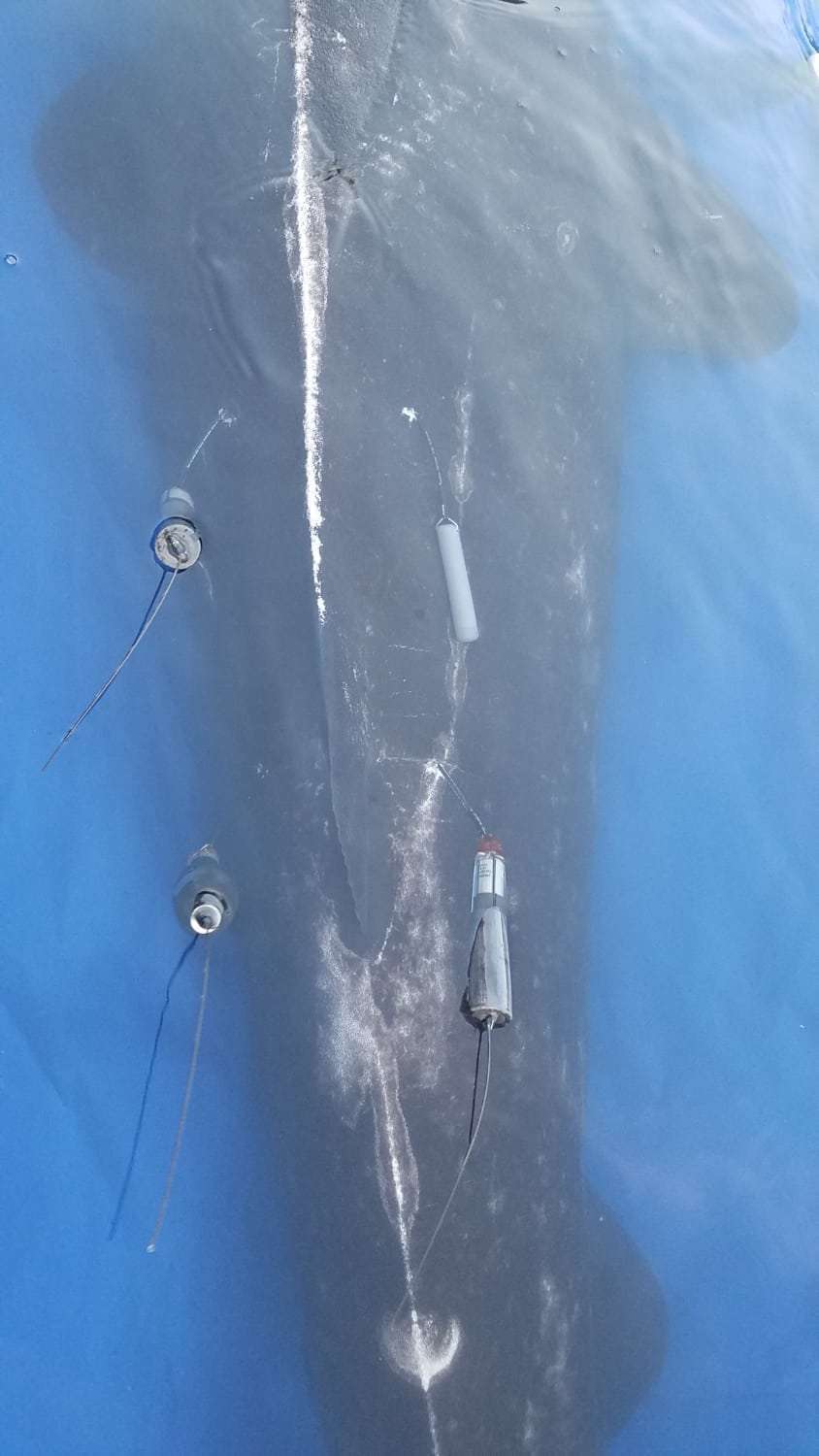 Back to Overview
Spatial analysis